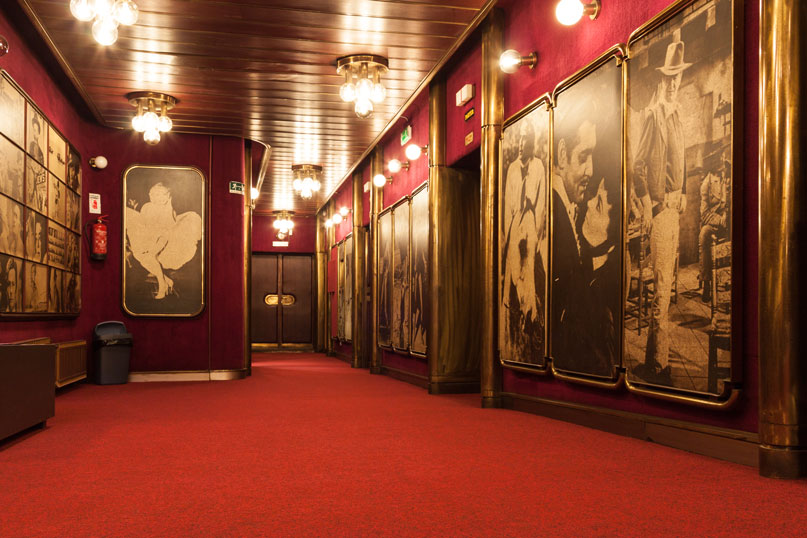 At the time when the very first movie theatres appeared in the early 20th century, Rijeka was up to date with the then trends in the field of film projections and distribution. After the opening of the first permanent movie theatre (Salone Edison, 1906), the first such theatre within the borders of today's Croatia as well, over the next 100 years abut thirty movie theatres opened in Rijeka, before the appearance of multiplexes.

We can date the movie theatre that was named Croatia in 1991, located in a building owned by the Rijeka Capuchin convent in today's Krešimir Street, back to 1927, when the first film projections in the Capuchin theatre Teatrino Cappuccini were mentioned. By the end of 1928, the name of the theatre changed to Cine San Giorgio. Over the course of the following ten years, the Capuchin theatre, in addition to theatrical performances, periodically showed films. In 1937 the movie theatre San Giorgio was opened in the restored building, one of the last permanent Rijeka movie theatres.

The building, located today where the Ciottina Street, the Capuchin stairs, Žabica Sqaure, Krešimir Street and the Railway Track intersect, has been part of the Capuchin estate since the beginning of the 17th century. In the last three hundred years, a complex of Capuchin buildings for church and secular purposes was developed on this location, concluded with the sanctification of the Capuchin Church of Our Lady of Lourdes in 1929.

This monumental construction undertaking of the Capuchins corresponded with the perhaps most intense historical and political decades of the 20th century for Rijeka. During this period, the Capuchins participated in the Catholic activism at the time, led by the Provincial of the Croatian province, Bernardin Škrivanić. The building complex is certainly a reflection of the enterprising spirit of the Capuchin leaders. Steadily expanding on the suburban land plot, the complex was on par with the other public and private edifices at the time, architectural analogies of the development boost of Rijeka at the turn of the 20th century. Renowned architect Giovanni Maria Curet, educated in Trieste and Budapest, designed the complex and supervised all construction projects within the monastic complex from 1903 to 1913. In addition to the preliminary and final designs of the new Capuchin Church, Curet also designed the string of business and residential buildings along the southern border of the complex as well as all other monastic facilities. In compliance with the Lourdes Sanctuary as a model, the Church was designed as a double structure, and its location on steep terrain was conceived as a contemporary architectural and symbolic emphasis. The construction of the church was continued in 1913 by the Rijeka architect Cornelie Budinich according to a changed design and, although it was consecrated in 1929, it remains unfinished to this day since the central bell tower was never constructed.

In 1910, in the western part of monastic yard a simple structure was erected, in which the productive and respectable Capuchin printery Miriam operated (Miriam Printing Institute of Fine Arts of the House of Good Print Publishing Institute). The southern side of the printery leans against the yard wall of a business and residential building in the Corsia Francesco Deák Street (today's Krešimir Street), built in 1911. With facades designed by combining anachronic historicist(Neo-Renaissance) decorative elements and Secession proportions, the building correlated in an urban-planning sense to its environment – the Capuchin Church on the eastern end and the buildings across the street of the Hungarian State Railway and the line of plane trees along the Corsie Deák street.

In the full swing of the struggle for political and church power in Rijeka, after World War I (1918 – 1924), the Croatian Capuchin Province was annulled and in 1923 the Rijeka Convent became the property of the Venice Province. The Miriam printery was closed and sold, and its premises were turned into a multi-purpose hall for cultural and entertainment purposes, called Teatrino Cappucini, mentioned for the first time in print in 1927. In it, smaller theatrical performances and lectures were held sporadically, sometimes accompanied by film projections. In late 1928, the name Cine San Giorgio was mentioned for the very first time in print along the announcement of a film screening (Crocodile Cave). No documentation has been preserved on the building, so we can only guess how it was adapted for film screening purposes. Its location in the vicinity of the second busiest Rijeka walkway certainly contributed to the attendance of the performances and projections.

A decade later, on 2 October 1937, in the part of the Capuchin business and residential complex in the Viale Camicie Nere 2 (Corsia Deák, Krešimir Street) the movie theatre San Giorgio, was opened as the new permanent movie theatre in Rijeka under the management of the cinematographic enterprise San Giorgio (Azienda Cinematografica San Giorgio). The daily paper La Vedetta D' Italia reported on the pleasant, completely renewed movie theatre in the "style of 900" in which values of national cinematography (naturally, Italian) will be promoted. The theatre was opened after significant reconstruction – an extension, additions and modernisation, most significantly the construction of a balcony above the back of the main floor and the adjoining premises with the main hallway, toilet facilities and a stairway for the balcony with the waiting room. The capacity of the hall was greatly increased to 698 seats (576 on the main floor and 122 on the balcony, making San Gorgio the largest move theatre in the city, along the Teatro Fenice.

After World War II, in 1947 the property of the cinematographic enterprise San Giorgio was confiscated, and the movie theatre became part of the newly established city cinematographic enterprise, and its name was changed to Belgrade. According to the categorisation of the Rijeka movie theatres from 1951, the movie theatre Belgrade, then located in the renamed Boris Kidrič Street, was classified with the movie theatres Partizan and Jadran as a first category movie theatre, whereas the theatres Viševica, Garibaldi and Tuhobić were classified as second category theatres. Since 1951, the movie theatre was constantly reconstructed and improved and its equipment modernised. The first greater post-war re-adaptation of the hall was carried out in 1957 according to the design of architect Milan Švalba. The walls were lined with narrowly spliced European ash wood boards, visually deepened the perspective of the hall. The roof frame was reconstructed, as well as the power unit of the central heating, the office and projection cabin adapted, and in the following couple of years ongoing and investment maintenance projects were regularly carried out.

After the spatial conditions were created, from 1965 to 1967 the entrance area was extended and obtained its present appearance with the new box office, according to the design of Ante Scarpa and Milan Švalba. At the same time, along the eastern wall of the hall, a new boiler room was built in the yard of the convent.

In the early 1970s, the movie theatre was denied the right to use the monastic yard for the exit of the audience, which it had had since 1949. The new exit was created on the western side, next to the railway track, where a station-house was demolished so that the exit stairway could be constructed there in 1977. The former exit could still be used as an emergency exit.

A complete reconstruction of the interior of the movie theatre was performed from 1975 to 1980, with a complete reconstruction of the central heating installations, air-conditioning and electrical wirings (according to the design of the Faculty of Engineering). The project was entrusted with the Technical bureau for design and engineering of the Rijeka Residential Enterprise, and its manager and chief design engineer was Borislav Horozović. The adaptation largely relied on the existing structure, and the novelty was a stage of symbolic dimensions (with a depth of only 1.20 meters and the length of a film screen), envisaged for announcements, information before projections and lectures. The audience floor slope was corrected, a framework for the new cinemascope screen was set up, and the walls, ceilings and doors were panelled with different materials in accordance with acoustic requirements (wood, plaster, wool carpet, linen). Due to the prescribed ratio of the dimensions of the screen and the depth of the viewing area, the number of seats was reduced to 454 (343 on the main floor and 111 on the balcony), which resulted in an increased comfort of the viewing area.

In 1991, the Cinematographic Enterprise was renamed into Rijekakino and the movie theatre changed its name into Croatia. Soon a new screen structure was set up in front of the previous one, of larger dimensions and without a stage, which reduced the number of seats to 323 (228 on the main floor and 95 on the balcony). There were no other considerable alterations until the closing of the movie theatre in December of 2007.

The uniqueness of the concept of the renovation of the interior of the movie theatre from the late 1970s, almost in the manner of total-design, as well as the consideration of the design on both a functional and construction level and on a symbolic level, along with the appreciation of the cultural heritage, are some of the reasons why these premises are highly valued today. For instance, the spliced plaster boards on the ceiling were set up for acoustic reasons, but also significantly contribute to the decorative expression of the premises. The concave stretched photo canvasses on the lateral walls also represent acoustic panelling, and feature illustrations of riders and horses – paradigmatic representations of kineticism in visual arts and the early development of motion pictures. 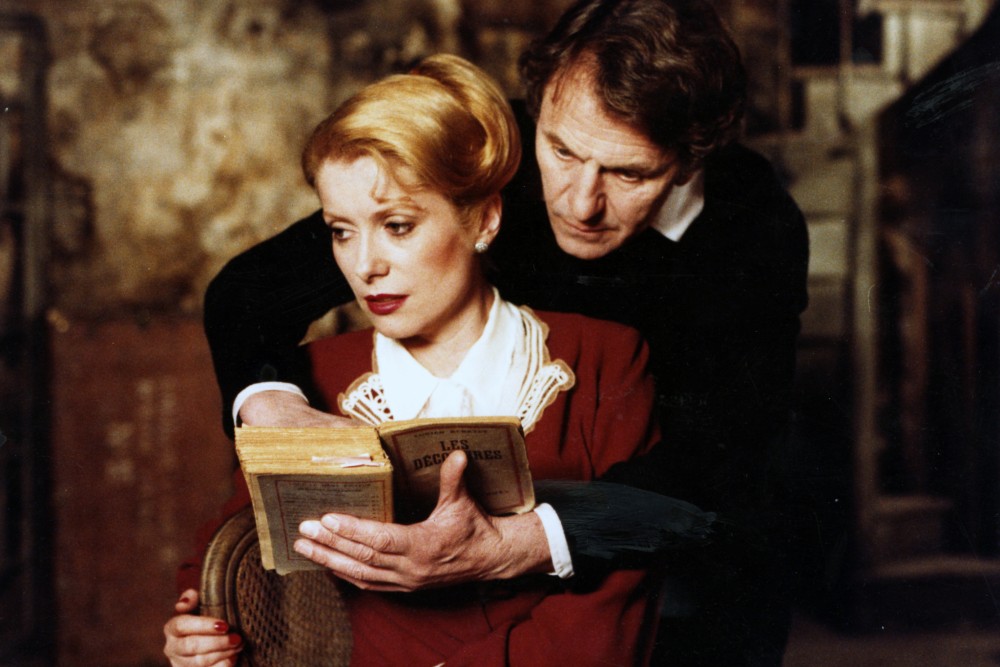 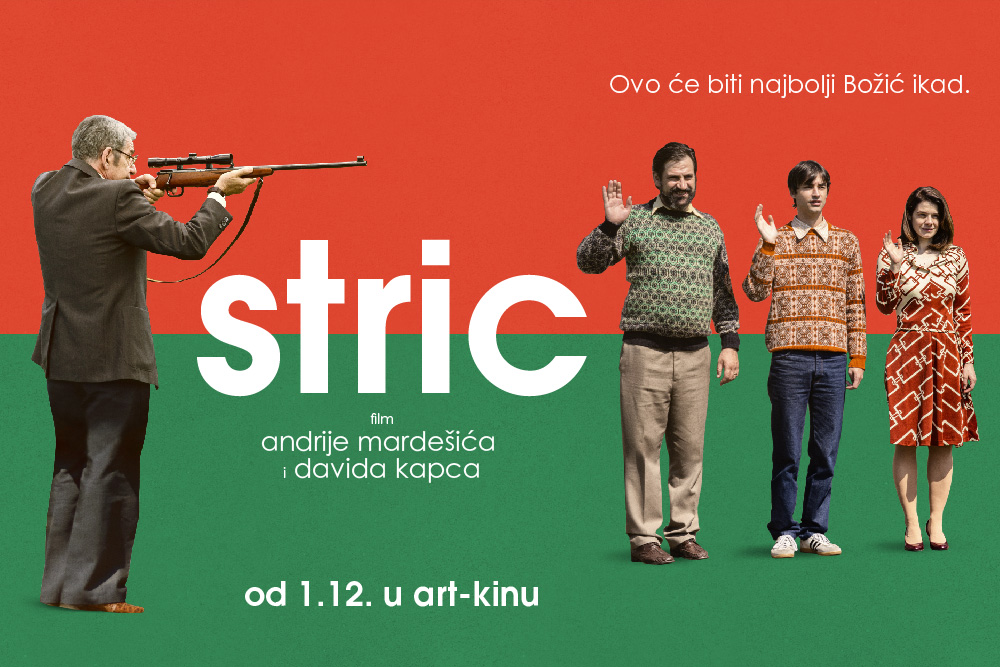